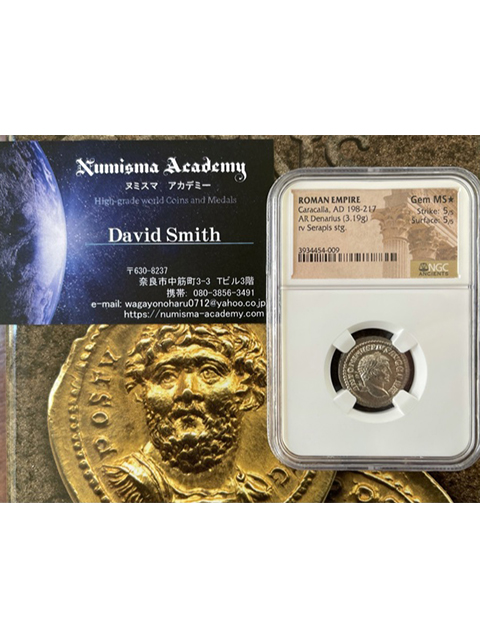 
Caracalla ( Marcus Aurelius Severus Antoninus Augustus), 4 April 188--8 April 217, was Roman emperor from 198 to 217. The eldest son of Septimius Severus, he was a member of the Severan dynasty. He ruled alongside his father from 198 until Severus died in 211. Then he ruled jointly with his brother Geta, with whom he had a difficult relationship. His reign was marked by external invasions from German tribes and domestic instability. Caracalla's rule was notable for the Edict of Caracalla, which provided Roman citizenship to most freemen in the empire. He was known for introducing a new Roman currency called the antoninianus, a kind of double denarius, as well as massacres he ordered against people throughout Rome.

From 205 to 207 Septimius Severus had his two difficult sons live together with him in order to attempt to iron out the problems between them. He was unsuccessful. After Severus died on 4 February 211, the two brothers, Caracalla and Geta, jointly inherited the throne. While journeying back to Rome with their father's ashes, they argued nonstop, which made their relationship even more difficult. It was on 26 December 211, during a reconciliation meeting, set up by their mother, that Caracalla had Geta killed. Geta died in his mother's arms. Caracalla then began the persecution and execution of many of Geta's supporters and friends. In total, 20,000 people were slaughtered. The historian Gibbon wrote that Caracalla was "the common enemy of mankind," since both provincials and Romans were subject to "his rapine and cruelty."

Caracalla was killed by Julius Martialis, an officer in the imperial bodyguard, during a voyage between Edessa and Carrhae, when he was out of sight of other guards. The man behind the assassination was Macarinus, commander of the praetorian guard, who became the next emperor.