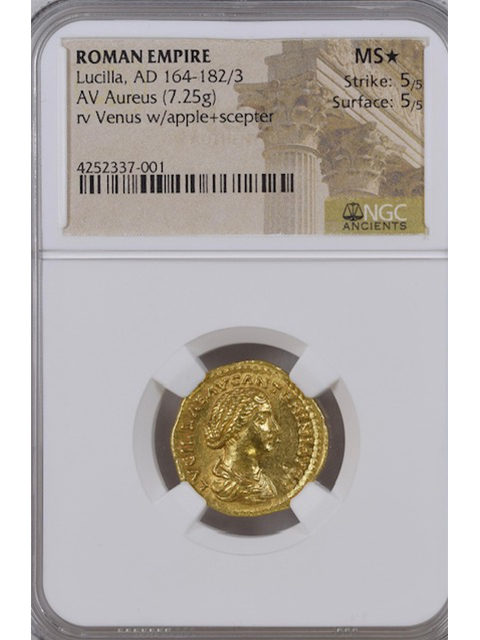 Lucilla, wife of Lucius Verus (died AD 182/3). AV aureus Rome, AD 164-169. LVCILLAE AVG ANTONINI AVG F, draped bust of Lucilla right, hair arranged in parallel plaits and tied wrapped in double chignon / V-E-NVS Venus standing left, holding apple in right hand and scepter in left.
RIC (Marcus Aurelius) 783. BMC (Marcus Aurelius) 320. Calicó 2218 . Cohen 69. The second of six daughters born to Marcus Aurelius and Faustina Junior,
Lucilla grew up as an imperial princess, with the strange mix of power and helplessness such a position entailed in ancient Rome.
In AD 161, at the age of 12, she was betrothed to Lucius Verus, who was her father's adoptive brother and co-emperor.
The marriage took place three years later in Ephesus, while Lucius was on campaign against the Parthians in the East.
The marriage endured until his sudden death to a stroke in AD 169. Much against her wishes,
her father then married her to a distinguished elderly senator, Tiberius Claudius Pompienus. Although her husband was one of the most powerful men in government,
Lucilla was no longer Augusta, or empress, a situation she found increasingly intolerable.
The death of Marcus and the accession of her brother Commodus in AD 180 made matters worse,
since she frequently quarreled with him and envied his wife, Crispina, who now held the title of Augusta.
In AD 182, she entered into a plot with one of her lovers to do away with Commodus.
But the assassin hesitated after drawing the knife and was wrestled to the ground before he could strike.
When Lucilla's role in the plot was exposed, she was arrested and exiled to the island of Capri, with her sister-in-law Crispina to keep her company.
Her death, either by starvation or execution, came shortly thereafter.
Although sympathetically portrayed by beautiful actresses in the movies Fall of the Roman Empire and Gladiator,
the real-life Lucilla seems not to have been such an admirable character. She was, however, quite beautiful, as the portrait on this exquisite aureus reveals.
The reverse depicts Pudicitia, a personification of demure modesty, perhaps expressing her father's wishes rather than the reality of her character.